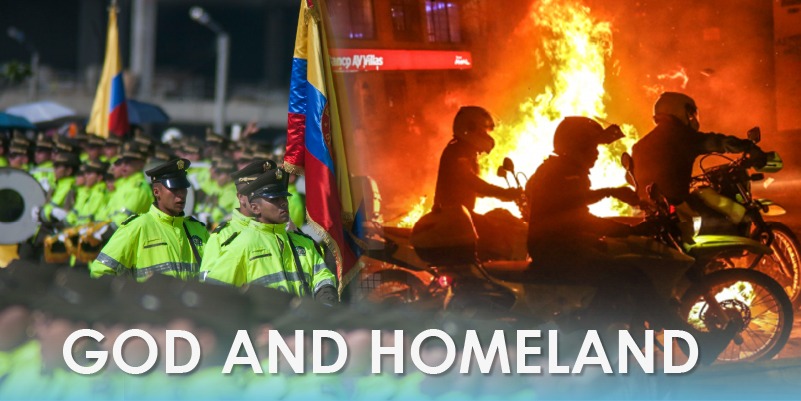 “It will never be like before. So many years of effort were stopped. It is a lie what some say, that the one who does not study is a policeman.  But I thank God because he is alive”. These were the words of Jennifer González, upon learning that her husband, Major José Luis Rodríguez, would lose his left eye after receiving an impact from a rifle on the night of May 3, when the Special Operations team of the National Police –GOES- intervened in the Siloé neighborhood in Cali, due to the strong disturbances caused by vandals and urban terrorist cells that were part of the protests in the city, within the stage of the ‘National Strike’ called since last April 28.

“Why do they say that the policemen are murderers?  My dad is not a murderer” wondered the 11-year-old daughter of the uniformed man, who for three days struggled to cling to his life, because the projectile he received was situated 2 millimeters from his brain and completely destroyed the eyeball.

The same fate accompanied the patrolman Ángel Gabriel Padilla, who on May 1 received more than 27 stab wounds while traversing on the road that connects Cali with Yumbo, in Valle del Cauca. The picture was heartbreaking: the policeman was running alone, in his underwear, amid the chaos, because an inflamed mob had taken away the civilian clothes he was wearing.

Angel Gabriel was not a threat; he was even unarmed and had kept his uniform in the trunk of the car at family request to prevent him from being attacked, as many of his colleagues must do to get home safely.  As he passed through one of the barricades, Padilla was forced to take out everything he was carrying and, as soon as the attackers saw his uniform, they shouted: “Tombo (pejorative term in Colombia for a policeman) infiltrated, murderer!” and they fiercely fell to him with blows.

The patrolman lost his balance and fell, but the crowd did not stop there. They threw bricks at him, kicked and wounded him with a dagger.  The doctor told his relatives that one of the knives passed a few millimeters close to the aorta artery.

“We chose this profession and are aware that anyone of us could be wounded in a fight. But I never imagined that the same citizens we watch over, would try to take our life”, Yenedith Quiroz, wife of Ángel Gabriel Padilla, also a police patrol officer, told to a national media.

The institution in charge of defending the safety and life of Colombians is going through the worst moment in the recent history of the country. The void left by each member who dies serving their country, is an irreparable loss.

“Every day, the mob told us that we deserve to die, that we should be on the side of the people”, recall two patrolmen who almost died incinerated in one of the CAI (Immediate Attention Commands of the National Police) location that were burned during the riots in Bogotá.

Neighbors narrate that the protesters managed to make a hole in the window of one CAI location, through which they threw firebombs. “At that moment all the protesters began to celebrate, they look happy, as if it were a triumph for them, as if we were their trophy, because we heard how they yelled at us «Pigs! You are going to die, you are going to burn»”, affirm the patrolmen, who are miraculously alive today.

It is also recorded that 94 banks, 254 shops, 14 tolls, 4 monuments, 23 institutional vehicles, 69 transport stations, 36 ATMs, 2 governmental offices and 29 cameras of photo-fines have been attacked, damages that continue to increase due to acts of staggered violence by different criminal groups, that claim lives as if it were a great victory.

This is the case of the 34-year-old captain, Jesús Alberto Solano, director of the SIJIN (Judicial Investigation Section) in Soacha, who was vilely murdered while trying to prevent the looting of an ATM located in that municipality of Cundinamarca.

Solano was stabbed five times and two days later – April 30 – he died. He was an exemplary man, proud to belong to the National Police and in love with his career, during which he received 132 congratulations, 10 decorations and was about to receive his doctorate in education.

These stories, which seemed so distant decades ago when democratic security gave hope back to Colombia, today they are added to the more than 850 police officers injured in the riots, while their executioners receive international support.

The call from the left wing to call a march against the Tax Reform has not ceased, even though the document has already been withdrawn from the Congress of the Republic. It is clear that this was only a pretext to create destruction and death by turning the national territory into an extensive field of war, using the combination of forms of struggle, where the good guys are the new bad guys and the bad guys are the victims.